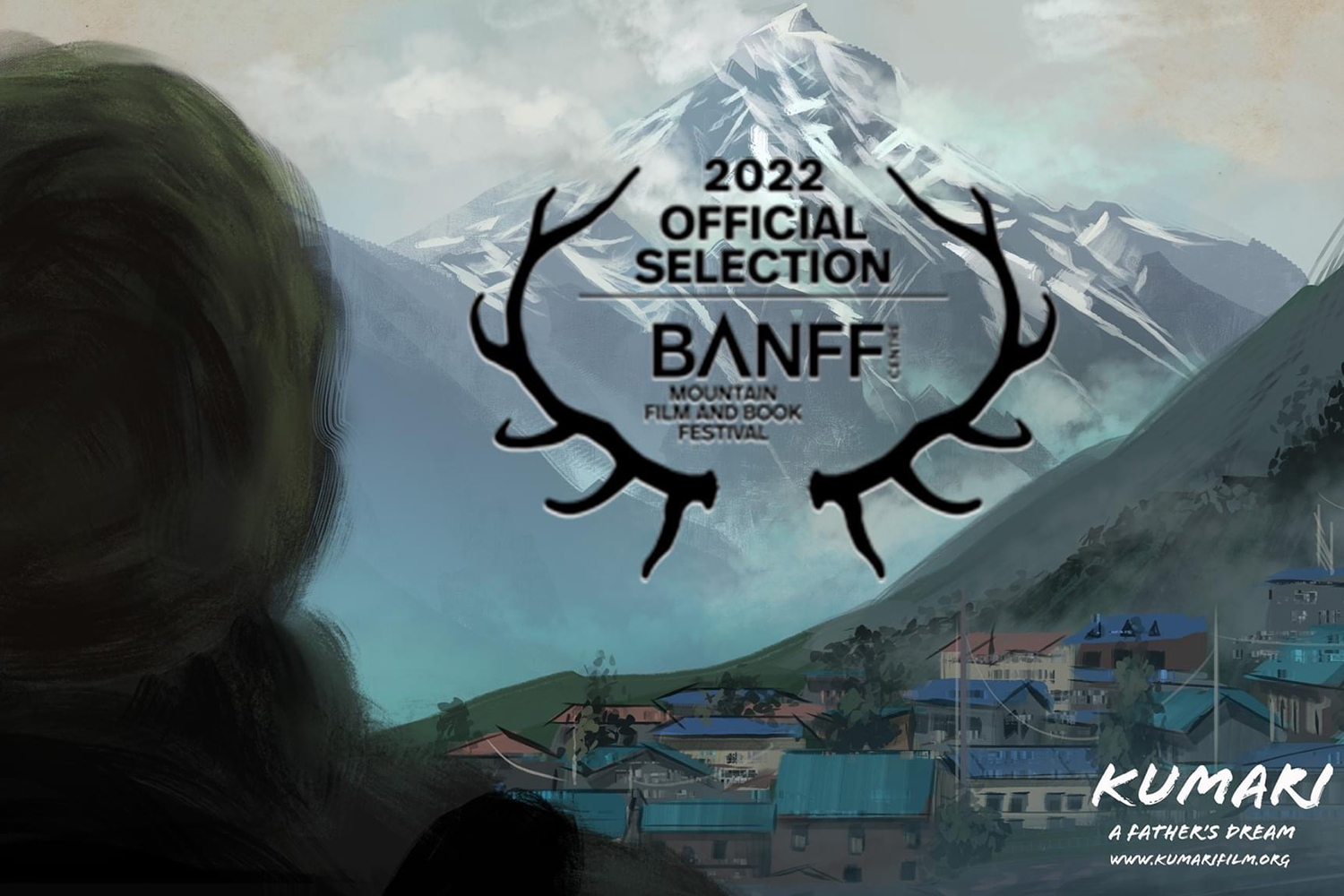 Big Lake director Les Zollbrecht is credited in a film gaining international recognition at the Banff Centre Mountain Film & Book Festival this year! Les’s connection to the film and the story it tells dates back nearly two decades to when he began trekking in Nepal with a local leader named Jagat Lama, whose story is the central focus of the featured film Kumari: A Father’s Dream.

Kumari: A Father’s Dream made its official world debut this month as a Banff Film Festival finalist and contestant for a People’s Choice Award (which you can watch yourself and vote for here), but even more exciting than the film itself is what’s happening in the rural village of Kumari where the film takes place.

“When I started getting involved and working in Nepal, connecting with the people there in the village of Kumari where our guides and porters were from,” said Les, “we started looking at the lack of healthcare and access to resources. My heart broke for what was going on there. People were dying at very young ages, especially women. Women were dying after having ten children and going through intense physical labor out in the fields without access to healthcare or any kind of family planning resources. You see so much suffering there. As we started investing and engaging in the community there by going over and doing treks and climbs, we were always asking ‘How do we make a difference? How do we not just walk through the beautiful spaces, not try to save anybody, or make them like us, but actually engage with the people and be good neighbors? Because, to me, that’s what it’s all about.”

The relationship between the people of Kumari and film has evolved over the years as local leadership has begun to bring major changes to the village. “I feel that my role in this project is to be a storyteller,” said Les, “I’m not trying to run any of the programs. I simply engage and am part of the economic engine––guiding and trekking––that helps the community in Kumari have a sustainable income that helps them out of the cycle of poverty. In the process, as we engage with people who have the means to partner and support the infrastructure projects there, we can help them get things accomplished. Some examples have been building a women’s skill center that teaches women how to make goods and clothing that they can take into the city and sell and bringing in things like sewing machines that they never had before to help them make those things. Another is a school, where the first generation ever is able to get an education up to eighth grade and can even get scholarships to go to medical school and pay off their debt by coming back to the community and providing healthcare in a place that’s never had it. Bringing in electricity and water, digging a cistern and building a road into the community are all parts of the overall project happening in Kumari that we can support and help tell the story of. Ultimately, though, all of this is being managed and run by a man named Jagat Lama––a local son of the community there.”

Jagat Lama’s experience is the central story told in the film Kumari: A Father’s Dream, which was filmed and produced by local Oregon filmmakers Sean O’Connor and the rest of the team at the Hood River-based company, Story Gorge. Through Jagat’s story, viewers come to know the larger experience of the village of Kumari itself. In the film we learn that Jagat’s own father died due to lack of medical access after sustaining an injury from a serious fall. We’re taken back to Jagat’s childhood days, to his one room home where he slept on a dirt floor with his parents and nine siblings. We’re taken through his escape from Kumari as a young man in order to pursue an education––the many obstacles he faced as he moved from homelessness to working as a dishwasher to becoming a porter carrying packs for tourists on trekking expeditions and, finally, becoming an expedition guide himself.

We see in the film how Jagat has taken everything he has learned and pointed it back to his community in Kumari. From helping establish the very first medical clinic and major road, to bringing electricity and education to his people, Jagat’s tireless advocacy for Kumari continues to this day. Through the film we see the results of that investment begin to appear. Over 150 women have been trained in the women’s skills center in just 3-4 years. One woman in the film shares, “We were not educated before. Daughters were not sent to school. They believed that their daughters would be ruined if they were educated. There were different traditions back then.” Another says, “Children here learn the traditions taught by their mothers, and slowly the whole neighborhood starts to learn from one another.”

In an interview from 2013, Jagat says, “Just five years ago we didn’t have anything here. We didn’t have a road like we do now. We didn’t have houses like this with wires and electricity.” Jagat and his partners have worked tirelessly to lift up the people of Kumari and have been met with numerous obstacles. Their first clinic and school were devastated by the massive earthquake in 2015 that left nearly 9,000 people in Nepal dead, destroyed most of the village, and left the vast majority of its people without food, medicine, or clothing. Despite everything, however, they began to rebuild again. Near the end of the film, Jagat shares his renewed hope that the work they began in Kumari will continue.

For his part, Les and his team are still engaged in the efforts, as well. As Kumari: A Father’s Dream travels to venues all over the world with the Banff Film Festival and beyond, Les hopes that the story it shares inspires people to take personal action. “My hope is that more people will go trekking with independent trekking guides,” he says, “We’re running an expedition to Nepal through Big Lake, so if you like the idea and want to help support the economy there, this is how we can do that. But we can also support them through friendship, through connecting. We can support by going up to Kumari and meeting the people in the community––which we do on our expedition––by talking with them and seeing the work that’s going on there. And if that breaks your heart, then engage, you know? Find ways to go about that. But that’s how we can enter into being a good neighbor in the first place, by being proximal to the people we’re trying to be a good neighbor to.”

You can sign up to join the next expedition to Nepal in March 2023, by contacting Les Zollbrecht at Les@biglake.org. You can watch a trailer for Kumari: A Father’s Dream, or rent the movie through the Banff Film Festival premier website.