Gloria Beerman: An Adventurer in Oregon 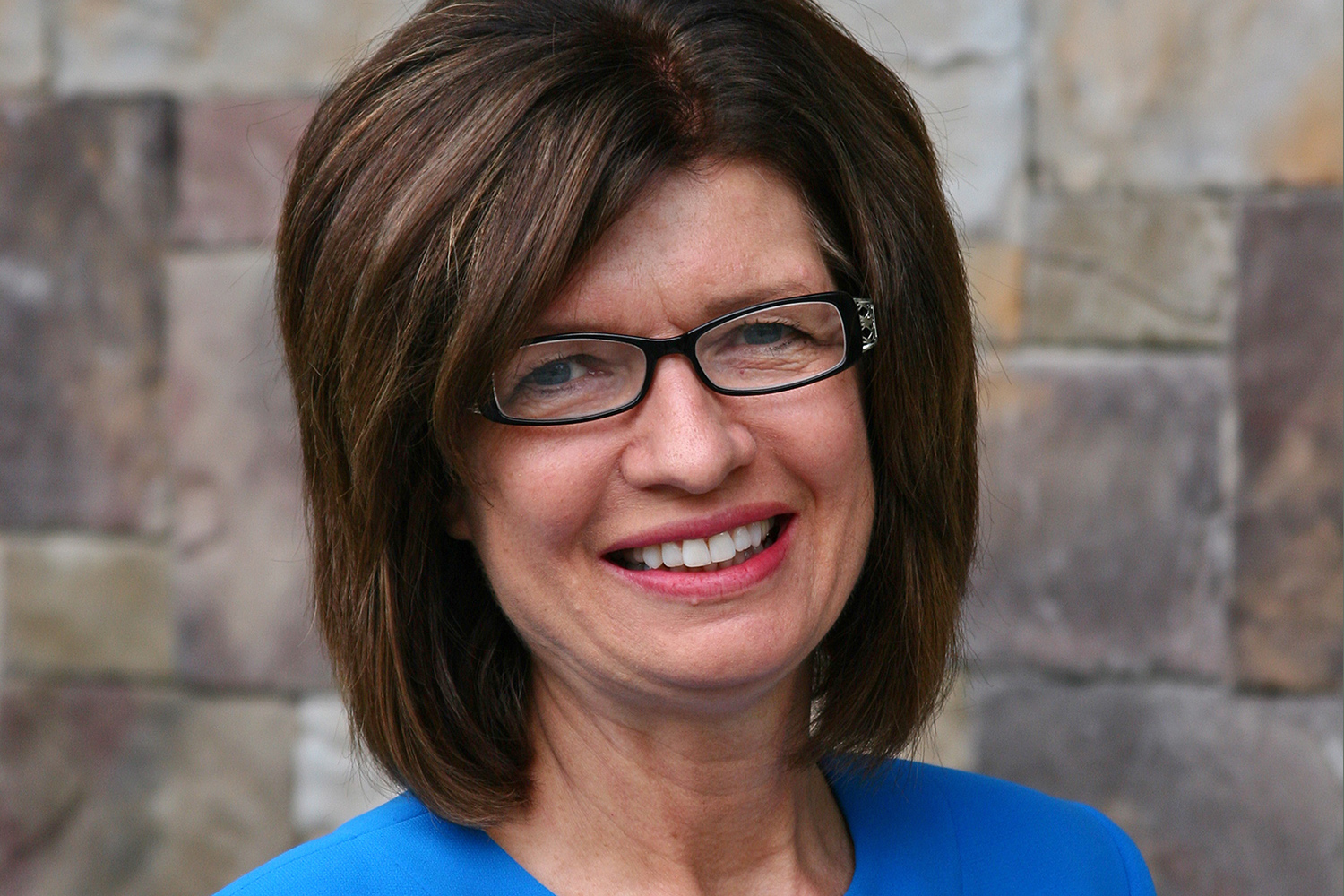 Editor’s note: Stan and Gloria Beerman announced their retirements earlier this year, to the dismay of so many of us who work with them. Stan retired on April 30, with Gloria choosing to stay on until August to help wrap up several projects. When she retires, her work record will show 41 years as a teacher and children’s ministry leader. This is the second article, the longer of two you will find here in the Newsroom about Gloria, because frankly, we couldn’t fit it all into one piece! We are all better off – closer to Jesus – because she has been here. Make sure you wish her well when you see her and Stan in the coming weeks.

“I taught for years, all eight grades. Some in small schools and others in combination classrooms, mostly grades 4 to 6 or 6 to 8. I started out teaching kindergarten, but in the later years I discovered I liked the way the older students learned, especially in the sciences.”

Gloria Grosnick grew up on the Saskatchewan prairie. On a farm in a big valley where she could wander for hours and hours in nature. In a place filled with amazing memories. By the way, her father is still alive and living on the family farm!

“Wandering in nature is a very spiritual experience for me. I talked to God a lot in those hours wandering on the farm. That’s when I figured things out. I still remember, I was probably about eight, when I came to the conclusion that all sin has its root in selfishness. That was kind of an ‘aha’ moment for me. “

The family farm, just out of Moose Jaw, Saskatchewan, was overrun with cattle, horses and other animals. Even pigs.

“My parents were baptized the year I was born, and I think that changed a lot of things on the farm. It was partly because of Dad’s sister. She was a very caring woman, a schoolteacher. She and her husband were always taking kids into their home, fixing clothes for the needy, and helping everyone around. She learned about Adventism, was baptized, and told my Dad to listen to The Voice of Prophecy. Dad really looked up to her, so he turned on the radio!”

As Gloria tells the story, you can almost hear the King’s Heralds singing about the Second Coming and HMS Richards speaking about God’s love. The Voice of Prophecy radio programs, combined with a small evangelistic campaign lead by a young Adventist pastor, helped the Grosnicks make their decision to become Seventh-day Adventists and raise their young daughter in the church.

“My Mom was an artist and taught me to love nature, especially flowers and birds. She was a colporteur, the lay ministry director for the church, and Sabbath School leader for the children. While Dad was really into supporting missions around the world, Mom was more focused on her kids and the local church. She was a very kind wonderful person.”

“Dad was the one who led out in daily family worships. He would get us all up well before breakfast and read from the Bible, from mission story books, and church papers. He would get really excited about what he was reading and ask us what we thought. Then we would all kneel down and pray together. I was the youngest, so I got to hear Mom and Dad pray for my sisters even after they had gone away to school. This happened every day in our home, and probably had much to do with who I am today.”

Gloria chose to attend Auburn Academy and then Walla Walla College. That’s where she met Stan Beerman. She had seen him around campus, and even been introduced to him by another friend. The real connection came when they both went to the wrong Biology lab together.

“We were in the same group, you know, working together as a team and someone sent us off to a different Biology lab. We started on the assignment, but then a teacher came in and told us we were in the wrong lab! We were both disappointed, until they put us into the right lab – together.”

“We went out two or three times, but then I invited Stan to help me with a branch Sabbath School I was leading in a tiny town outside of Walla Walla. I had gotten a group of my friends together, and we had been going door to door and asking the people if we could sing for them. The Lord really led out there. Lots of people asked us to sing, so we would sing a couple gospel songs. Often, they would join in, and even more often they would ask us to pray for them. We started a children’s Bible Study group there and kept it going for, I think, four years.”

Stan joined in the door-to-door singing, and then in the Bible Study time with kids. After three or four weeks they started talking about their spiritual history and found they really “clicked.” Gloria uses the words, “total bonding,” something they have continued for 48 years as they’ve ministered in Idaho, Washington, and Oregon.

“My first teaching job was in kindergarten, then I decided that since our youngest child, Aaron, was 2-years-old, I needed to stay home for a while. So, I quit and did homeschool with Aaron and his brother for a little more than a year. Then the school called and said they needed a teacher for the upper grades, and I said no. They kept calling, and I kept saying no. The Lord had made it clear that I was to make my family first right then. But they kept calling, and I kept praying.”

One morning Gloria felt God encouraging her to, at least, go in for an interview. She started the interview by telling them that she was not interested in the job. They told her that they respected her position, and that since they had 30 applicants for the position they would look elsewhere.

“There was a school constituency meeting that month, and the board asked for permission to hire a 5th teacher, knowing they would be turned down. Instead, the request was passed with flying colors, and I became the fifth teacher. It was like God was starting the journey for me.”

In 2006 the Oregon Conference asked Stan to move into the headquarters office as Ministerial Director and then asked Gloria to take over an office just down the hall as the administrative assistant in the Children’s Ministries department, and as leader for Adventurers – the little kids. Three years ago, when Gloria became the assistant director for Children’s Ministries, she continued in her role with the Adventurers. “They’re my kids!”

Moving to the Conference office was difficult for Gloria. She had loved the closeness of her church and classroom families. As a self-described introvert, she was fearful of walking into a new church every Sabbath and of finding ways to make friends who she would only see a few times a year.

The change was not nearly as frightening as Gloria expected. She made friends quickly, and though the Adventurers had become the driving force in her life, the travel provided another bonus. Gloria had begun making a lifetime bird list and driving around the conference gave her many opportunities to add to the list. In fact, Gloria Beerman is only the 3rd person to have seen 150 or more bird species in each county in the state of Oregon!

During Gloria’s time leading Adventurers, she has organized numerous special Adventurer Family Fun Days. They’ve played games while traveling on the “Oregon Trail”, learned how to build castles, train pets, identify birds, grow flowers, and celebrate the Fruits of the Spirit. Gloria has kept them busy. They’ve even gone camping with Jesus!

“After I'd been doing this job for five years or so, my sister sent me a back page picture from the Canadian Messenger magazine. The picture had been taken at a Junior Missionary Volunteers (JMV) meeting in our Moose Jaw church. There we were, and I was being invested as a Busy Bee! That was a long time ago, and I had never even seen the picture. There was a note under the photo asking if anyone could identify the people, so my sister and I let them know we had been there for the big event! My love for this must have started early.”

Read more about Gloria's work with Adventurers in our first retirement article for Gloria...

Click on any of the photos below to see a larger version in the gallery. 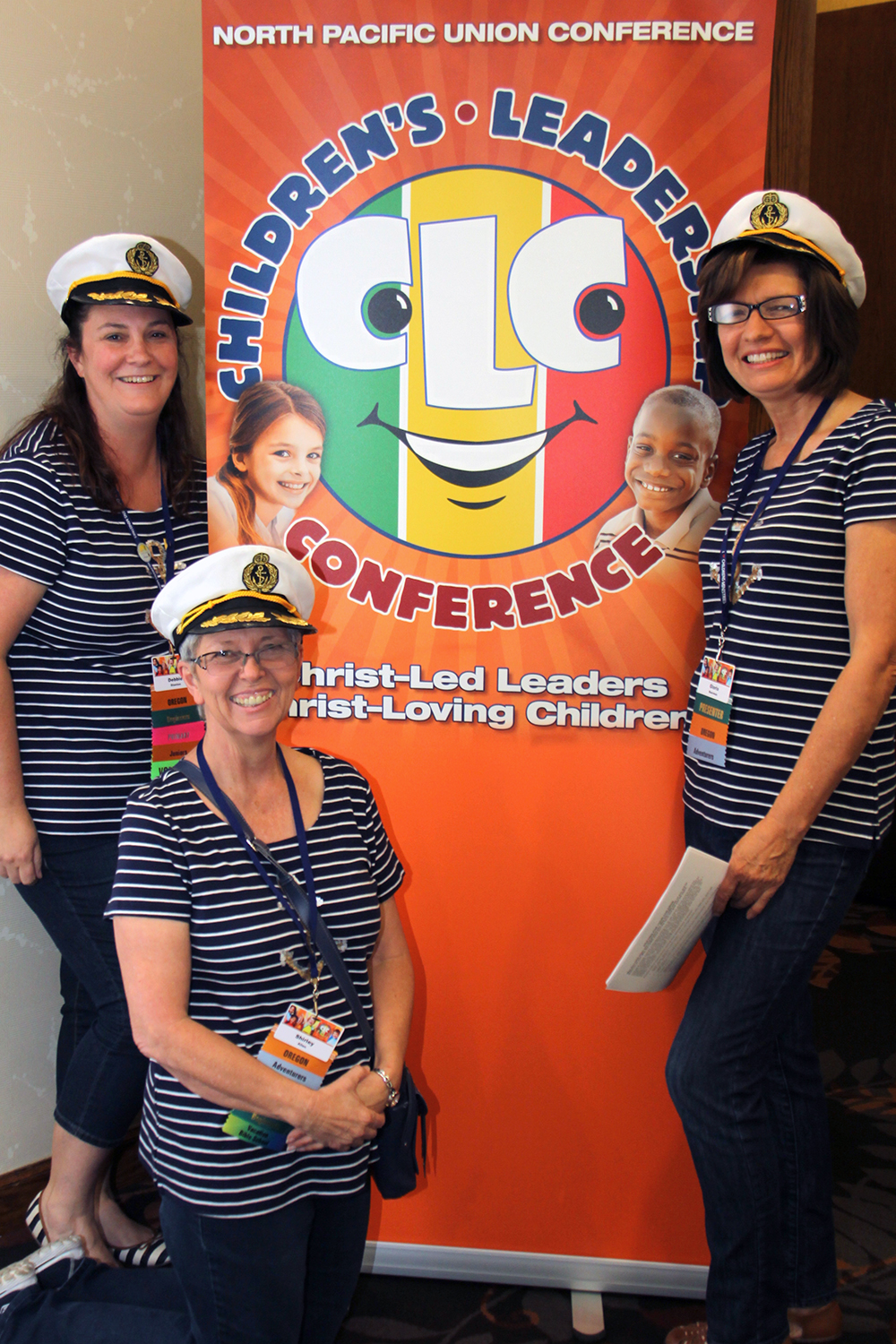 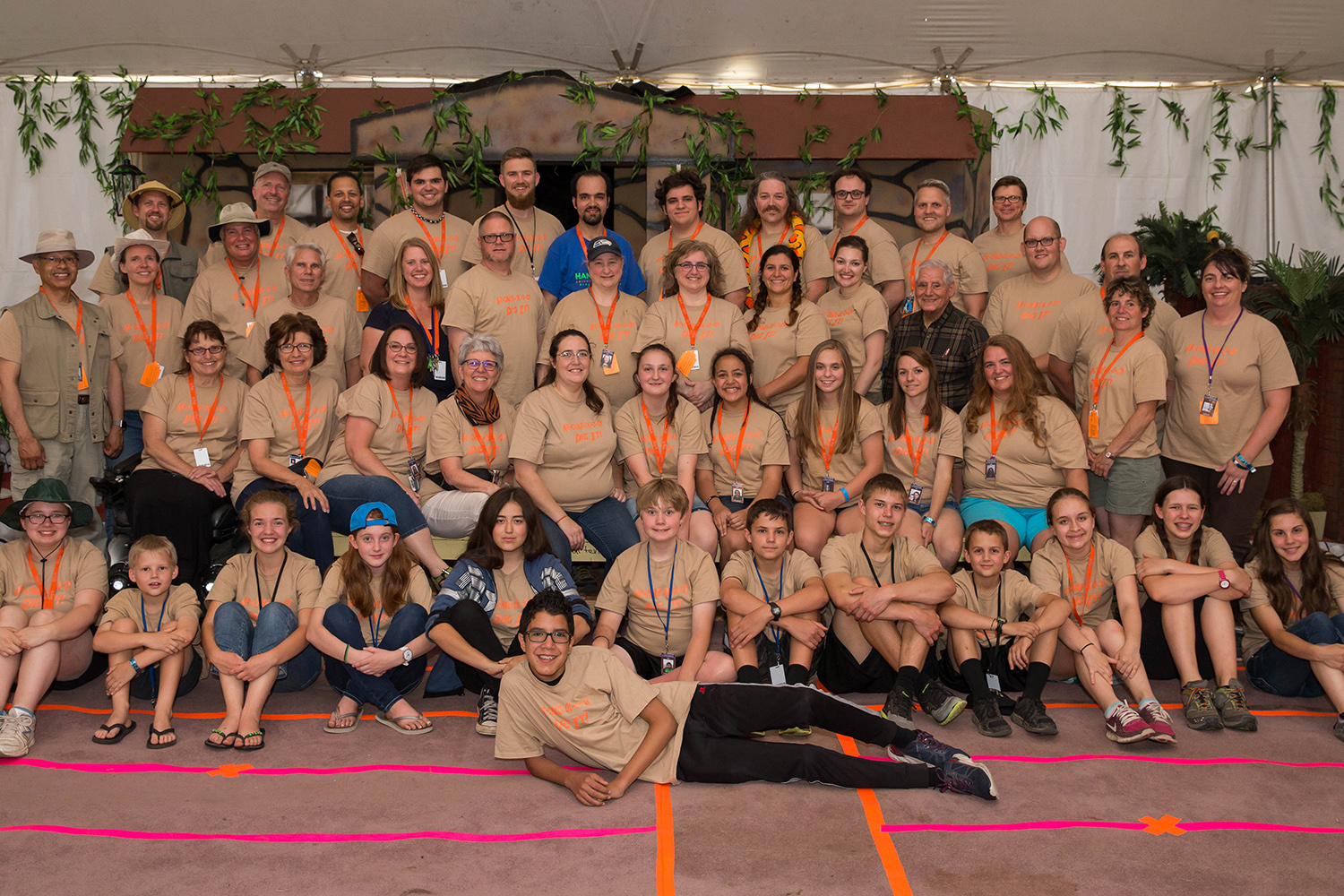 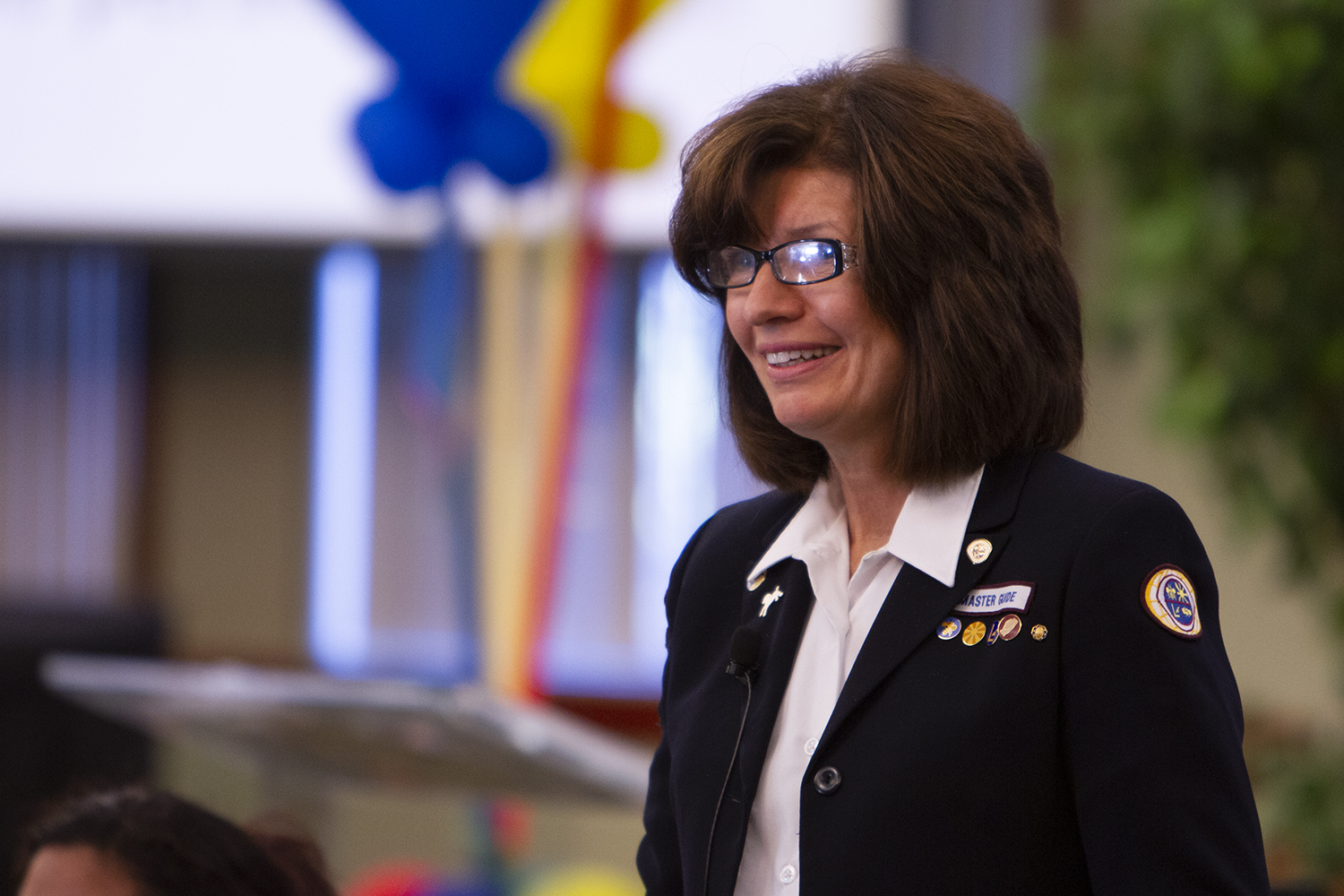 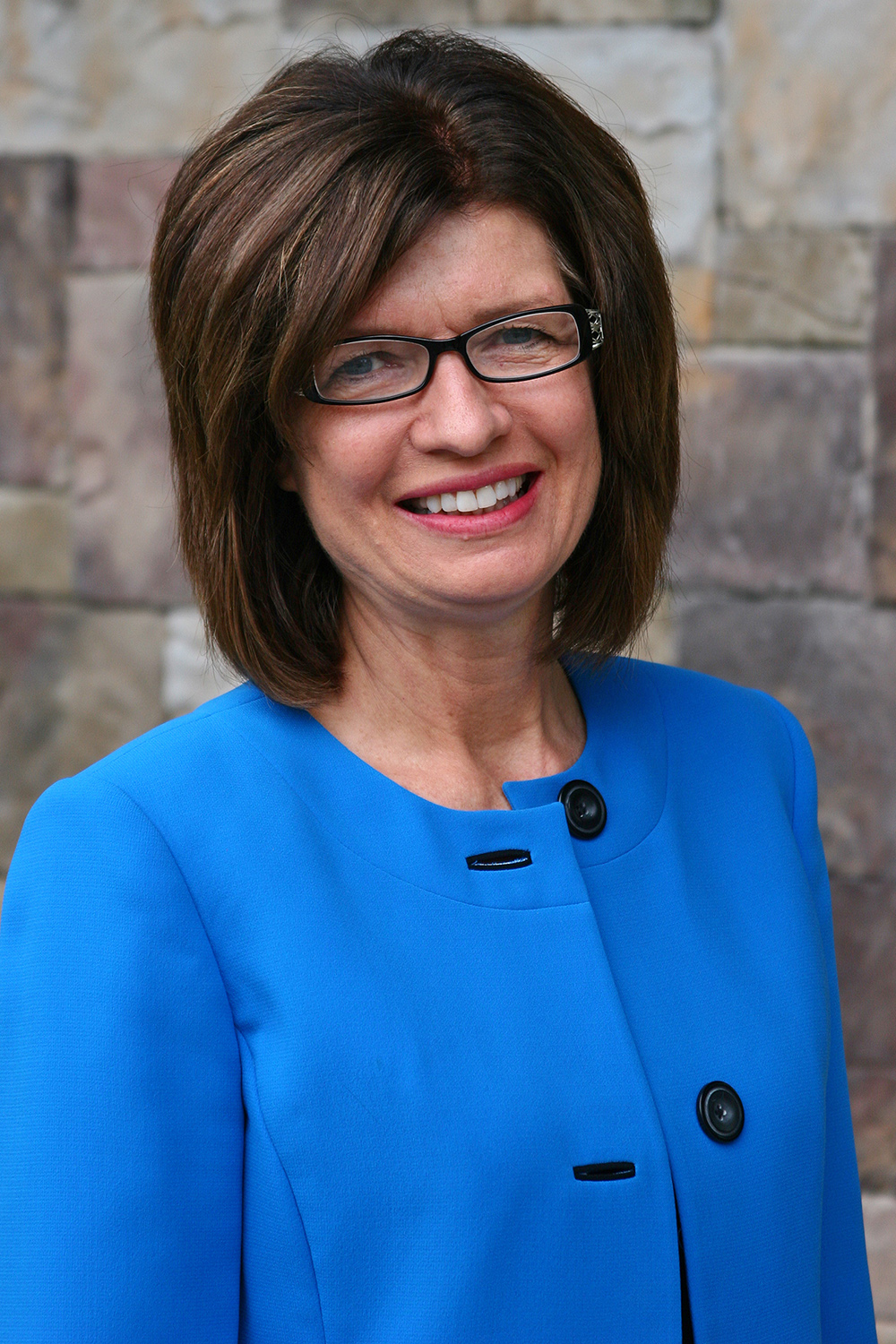 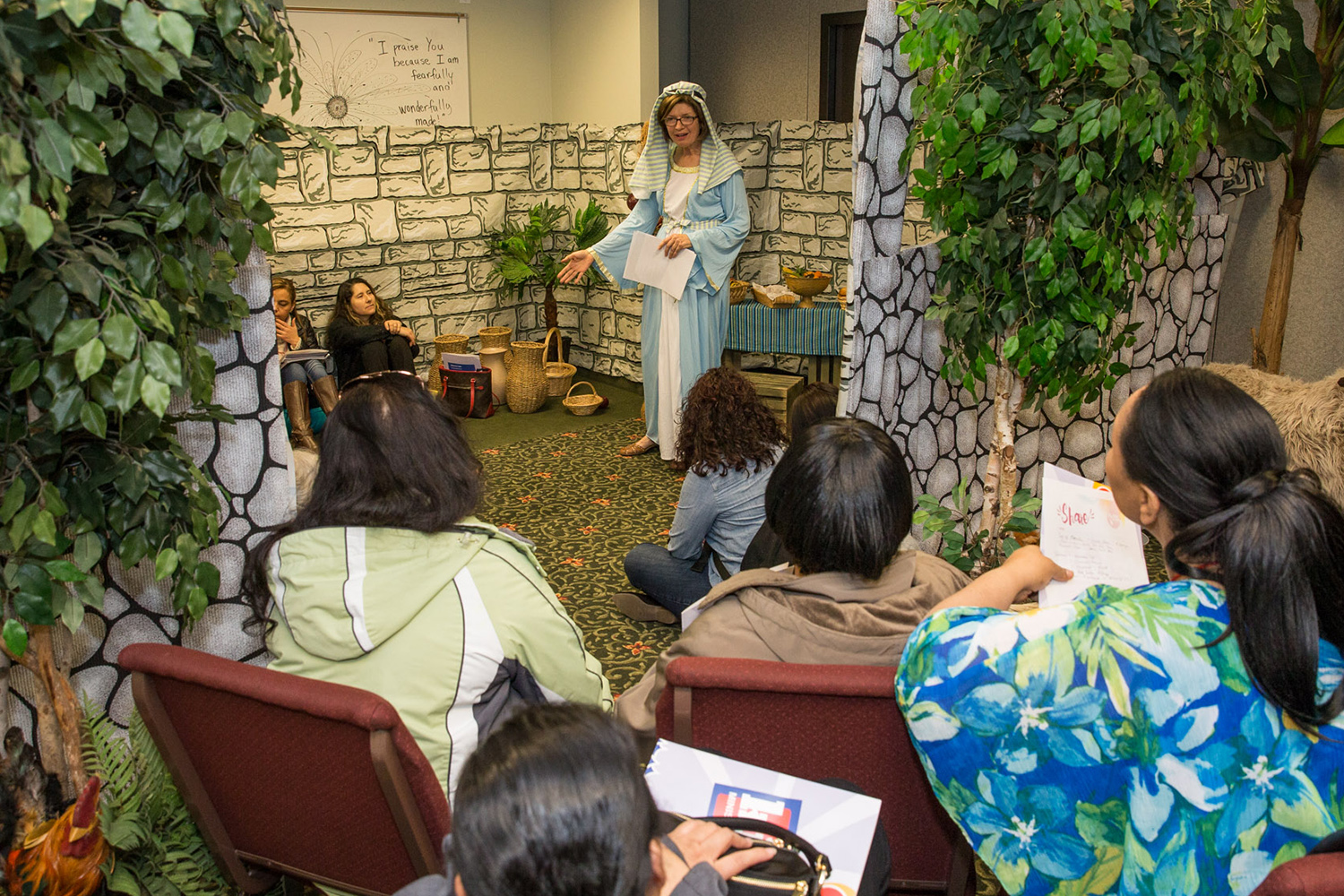 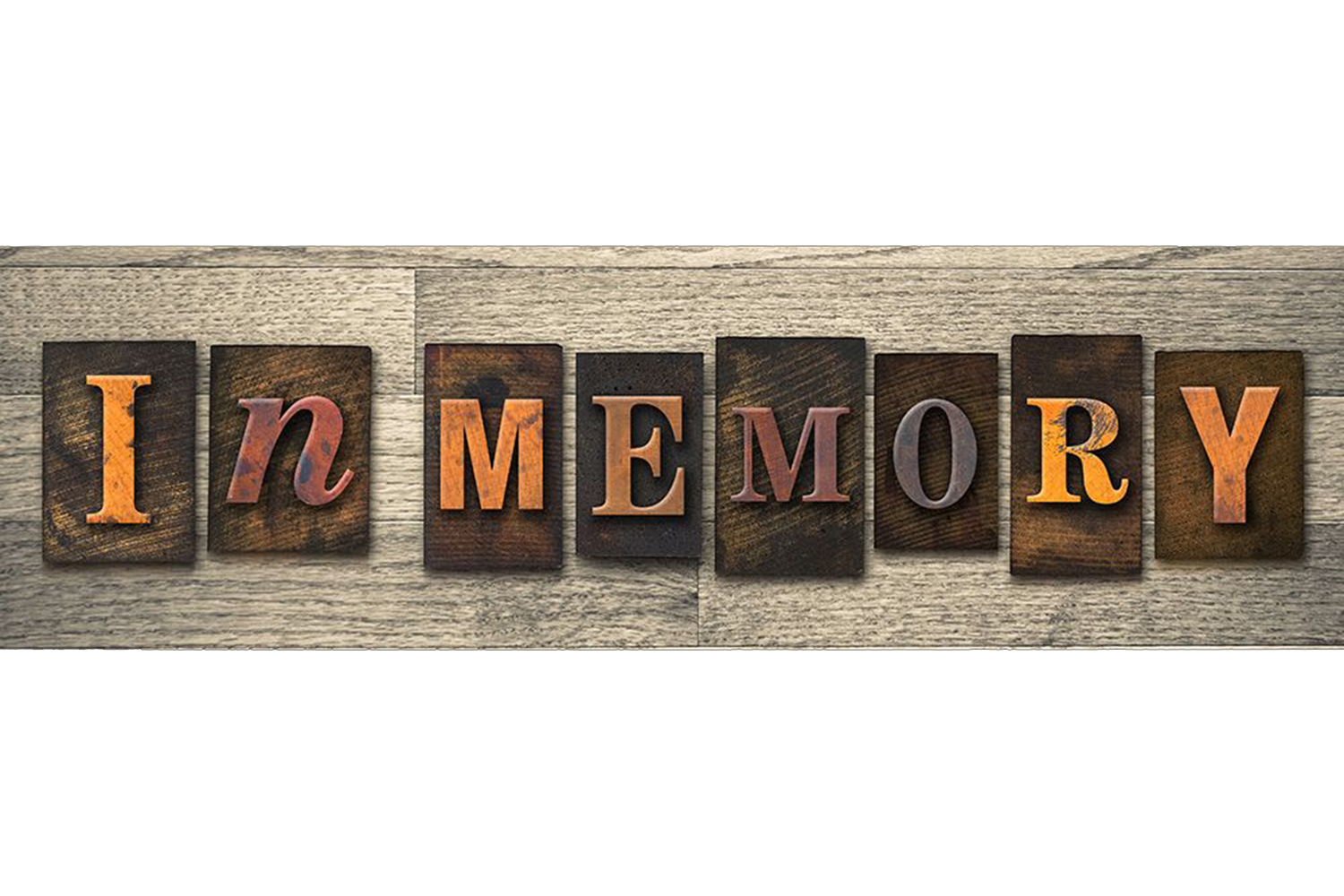 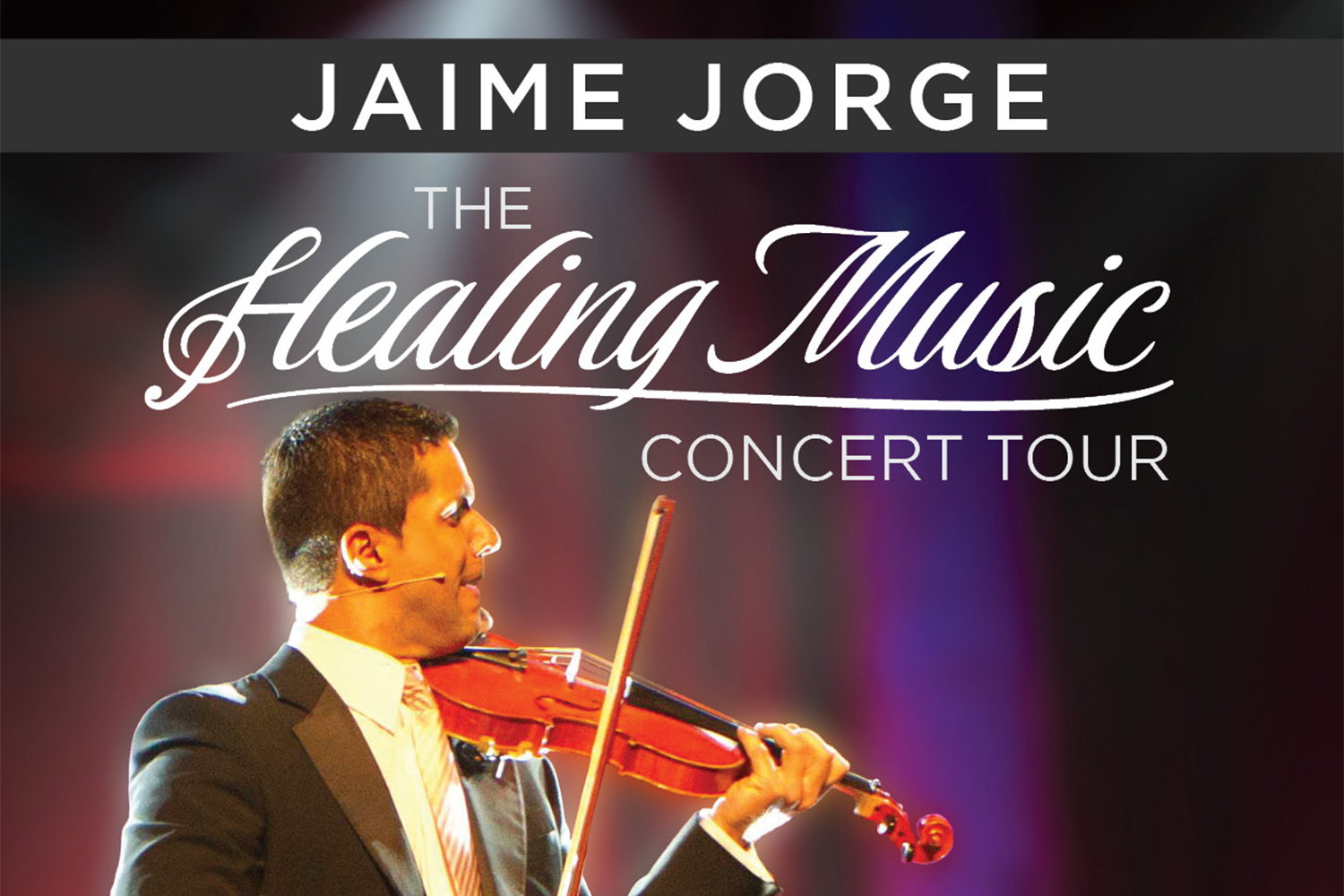 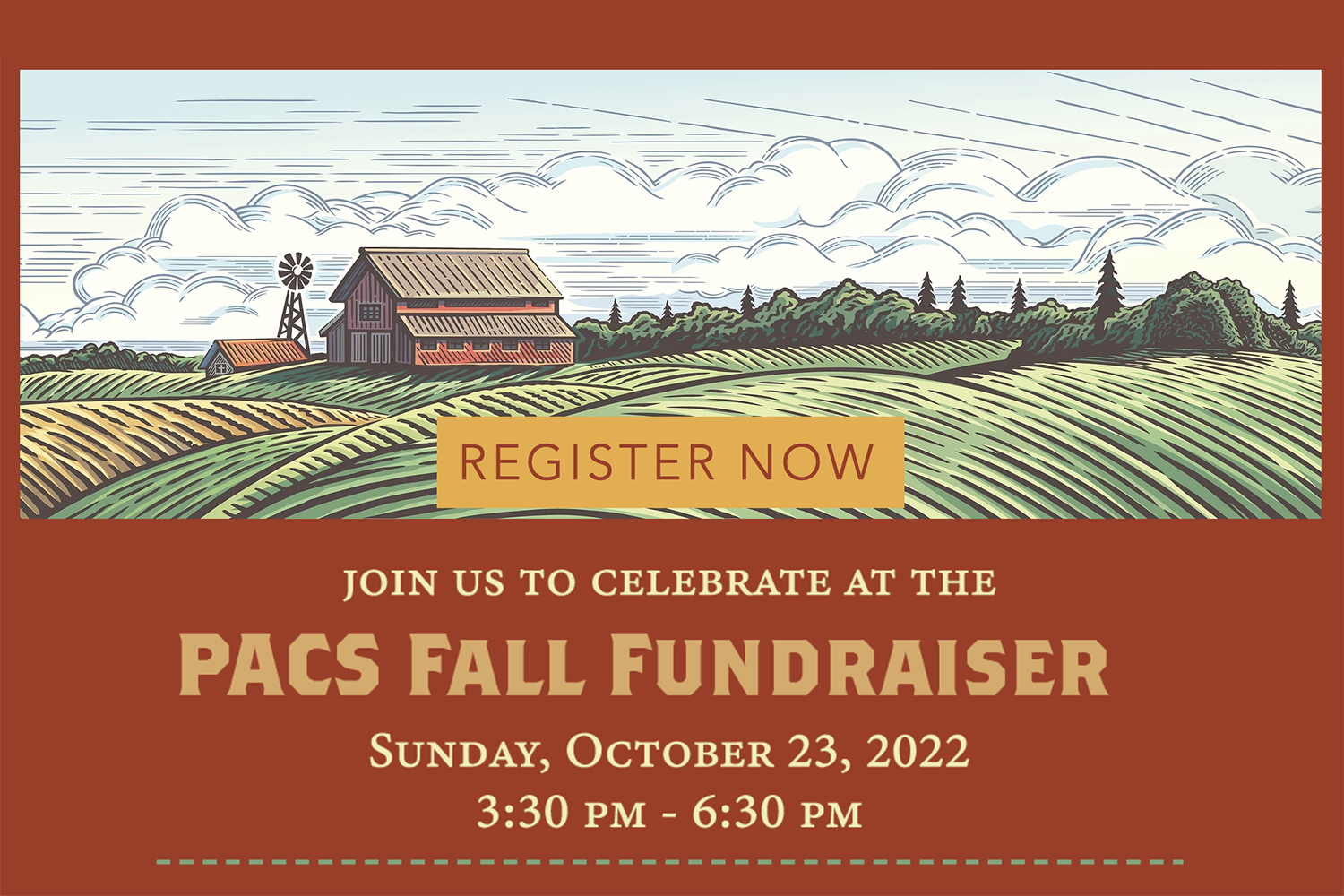