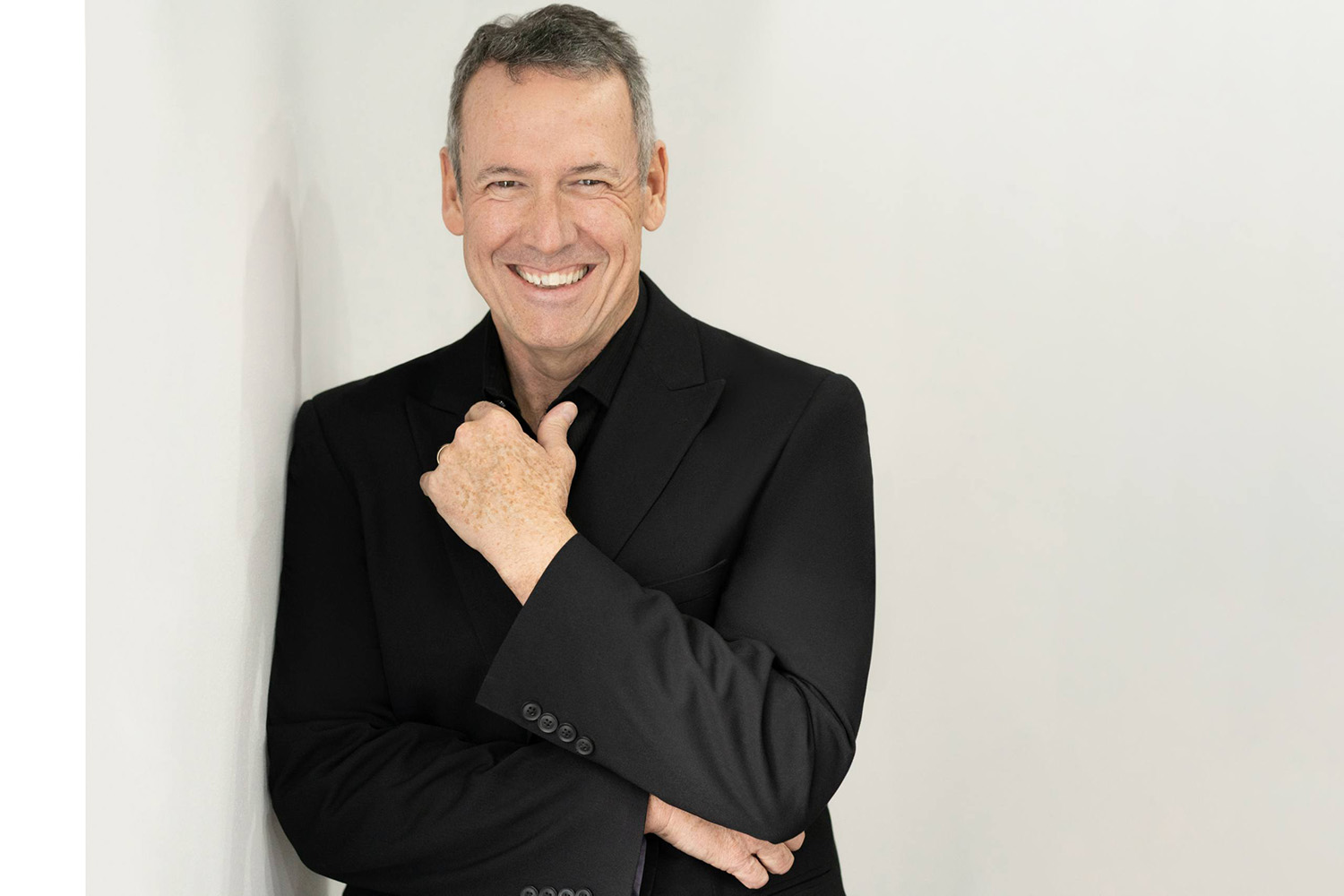 Sunnyside Symphony Conductor Travis Hatton’s sudden passing in early October has left much of the greater Portland music community grieving. An accomplished musician, a father, a mentor, and a friend, Travis’s impact on others over the years cannot be overstated. To illustrate some of that impact, Lynelle Hatton, Travis’s wife, shared this story with me when we met earlier this week:

Lynelle said she had been receiving many cards and messages of support from people after Travis’s passing, and one of those messages came from a man who had known Travis in their youth. Now the CEO of an international corporation, the man shared, “I was a friend of Travis's in first grade growing up in Stockton. A couple of years ago, I shared a story with Travis that I thought I'd leave with you––it's the story of his falconer's glove."

"I’m pretty sure this is when we were six years old. It couldn't have been much older than that as after that we parted classes and schools until high school. I barely knew what a falcon was, let alone a glove for handling falcons, but Travis did because handling falcons was something he was going to do. I'm pretty sure he saved up his money, because his family wasn't wealthy, as I recall, which is the norm in Stockton, so this would've been a big thing. This is one of my few strong memories from my very early youth. I think it stuck with me because it was probably the first time that I'd encountered somebody with an ability to have an ambition, a goal, a dream beyond our immediate surroundings."

"I don't know if his parents had any influence on this idea of training falcons, but I guarantee this was the only time I'd heard of someone using a falconer's glove until years later as an adult I was working in Qatar and a local colleague invited me along to see his trained falcons. Although I couldn't make it, I immediately connected this with the moment of standing on the school playground or at his house, perhaps, and having another six-year-old friend calmly explain to me what the glove was for and how he would use it. We were friends, but not especially close in school, and we went our separate ways after high school. We reconnected here on Facebook a few years ago, and I shared the story with him."

"Who knows what makes us into the people that we are? I suspect it's a lot of those little encounters, like having a friend at a young age who not only has a dream of doing something that sounds impossible and unheard of, but who has taken steps to reach that dream. Because the falconer's glove always resonated with me and is such an indelible memory, I suppose it helped me become the person that I am. And I have no question that if a six-year-old in Stockton is able to dream of something beyond his peers’ imagination, then it would be no surprise that he would continue to do that and reach another dream of being an orchestra conductor. Interestingly, with the hand at the center, but symbolized by a baton instead of a glove, which didn't occur to me until now.”

“Even as this little six-year-old he was a leader,” said Lynelle, “He knew what he wanted. He still had that glove and would tell us the story about how he always wanted to be a falconer when he was little––but he ended up having a baton in his hand instead. You have to be a leader to get a falcon to trust you––and you have to be a leader to conduct an orchestra. He was that same way for us. I don’t think we could have gone through this as a family if he hadn’t been that leader for us. He was our core.”

In his work, Lynelle says Travis worked hard to bring out the best in the people around him. “He had courage and determination. He knew he could help people be better. He knew that. He knew what their potential was, and he was determined to help people reach that. He wanted to do that so badly and that was the thing I think he was most proud of.”

One of the musicians that worked closely with Travis was André Wang, who played under Travis’s direction as Principal 2nd Violinist and was a member of the Sunnyside Orchestra for over 20 years. “Travis started the Sunnyside Orchestra in 2001. That was my first introduction to him–– being invited to play,” said André, “I loved to play music, and playing music at the level that he wanted to play at was so inspiring, challenging, and rewarding. It pushed me as a musician and as a person. But the greatest thing was that Travis believed in me. He believed in all of his musicians and had confidence in us. Just knowing that made us better. He was a firm leader, but he was never overly critical or negative or telling us that we weren’t worthy of playing these great musical masterpieces. The one time that I questioned his judgment was when he wanted us to play a Mahler symphony. Mahler symphonies are long, they’re like musical marathons that can last over an hour. I remember thinking, ‘There is no way we can do a Mahler.’ But to Travis our orchestra had the chops to do it, so we were going to do it. And we did do it, and it was beautiful! Travis believed in us even when we didn’t believe in ourselves, and that’s something I will always appreciate about him.”

Travis Hatton’s work extended far beyond the Sunnyside Orchestra. He led the Beaverton Symphony Orchestra, the Salem Philharmonia Orchestra, and taught as the director of orchestras at Valley Catholic School in Beaverton, Oregon. Radio host Christa Wessel of All Classical Portland paid tribute on air to Travis on October 7th. “I am still reeling from the terrible news from earlier this week of the passing of Portland conductor Travis Hatton,” she said in part of her tribute, “Perhaps you've seen Travis on the podium with any number of orchestras around our region. He led the Beaverton Symphony, the Sunnyside Symphony, and the Salem Philharmonia. He recently made a splash in August when he saved the day at Portland Summerfest Opera in the Park–– stepping up to conduct the second half of Aida at Washington Park.”

“Travis Hatton was also a mentor. He taught at Valley Catholic School, St. Mary's Academy, and held positions at MYS and George Fox University. Travis earned his master's in conducting at the New England Conservatory and his doctorate at Ball State. But that's all really just a résumé. It doesn't begin to tell you who Travis Hatton was.”

“If you don't mind, I'd like to try to attempt to do that myself. And while I do, I'm going to play in the background some music from a recent concert that Travis conducted with the Beaverton Symphony. This concert was from January earlier this year” [here, the music began to play as Christa continued her tribute].

“Not only was Travis Hatton a huge part of our cultural community here in the Pacific Northwest, but he was a big part of my life as well. I played horn for him in the Sunnyside Symphony for many years. Travis was a horn player himself, so we did have a bond there. But in truth, my connection with him was in no way remarkable, because Travis Hatton connected with everyone he met. He was one of the most genuine and kind musicians and humans that I have ever known. I found Travis Hatton so compelling, in fact, that I continued playing horn for him even after I began feeling an overwhelming urge to give the instrument up entirely. I kept playing the horn because of him. He made playing so enjoyable. I can't begin to tell you how big of an impact Travis made on me and how much I will miss him. And though I met Travis as a conductor, many others remember him as a compelling and inspiring educator. Every person who crossed his path will remember the perennial twinkle in his eye, his great big smile, and his sincerity. Travis Hatton listened. He connected. He cared. He made a difference. Travis will be deeply and desperately missed by thousands of people, friends, and musicians the world over. He made a tremendous impact, and because of that, I feel we've lost part of what makes our region so vibrant. My deepest condolences extend of course, to his family, but also to the cultural community at large.”